This day will allow you to have a first glimpse on the city and of its many treasures thanks to a city tour in coach and a Seine river cruise. You will then go to the second floor of the Eiffel Tower where you will enjoy a panoramic view over the capital.

During a city tour of about an hour and a half, you will observe the main Parisian touristic sites and districts as the Opera Garnier, the Louvre museum or the Arc de Triomphe. Thanks to the individual comments, you will stroll discovering the story of the city and its architecture. This ride will give you the opportunity to find your way around the city.
For the city tour, comments recorded in: French, English, Spanish, Italian and German. 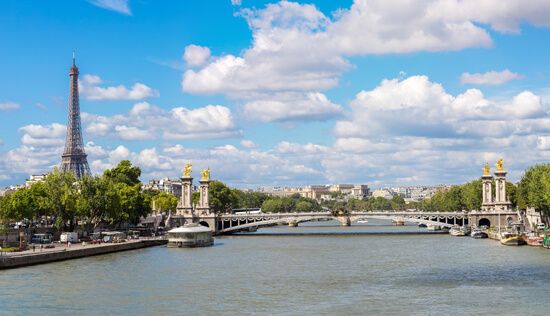 You will then embark for a one-hour cruise on the Seine river where you will discover the Ile de la Cité and the famous Notre Dame de Paris cathedral and the Ile Saint Louis.
For the cruise, comments recorded in 12 languages (8 languages provided and 4 languages on request) : French, English, German, Spanish, Italian, Portuguese, Russian, Dutch, Polish, Mandarin, Japanese and Korean.

You will then join the second floor of the Eiffel Tower where you will enjoy a breathtaking view over Paris. You can contemplate the capital, its monuments and the Seine at 360° from the terrace. Come back to New Port Bay Club at Disneyland® Paris around 7 p.m.

* This itinerary might be subject to modification without notice