Set off on a journey of discovery and explore France's top destinations on this four-day tour. With an experienced guide-interpreter from our team, you will start by exploring Normandy with the towns of Rouen and Honfleur and a tour of the D-Day Landing Beaches. The tour continues with a visit to Saint-Malo in Brittany and Mont Saint-Michel. The last two days will be spent touring the most famous Châteaux of the Loire Valley with your guide.

Take a seat on our air-conditioned bus, which leaves our agency in the center of Paris at 7:15 am. After a two-hour ride on the Normandy highway, the bus will make a stop in Rouen. There you will go on a walking tour of the city's historic district featuring the beautiful Notre Dame Cathedral, Gros Horloge (an astronomical clock that is one of the city's treasures) and half-timbered houses. The pedestrian streets, which date back to the medieval era, give Rouen a unique charm that served as the inspiration for many Impressionist painters. Claude Monet painted several views of the Cathedral.

During the trip to Honfleur (56 miles from Rouen), you will pass the striking Pont de Normandie suspension bridge that spans the Seine estuary. In Honfleur, you will have some free time during which you can explore the harbor town with its picturesque streets and incredible houses with slate façades. Enjoy lunch at one of the town's restaurants. Be sure to sit on the terrace to take in the sights of this typical Norman harbor town. 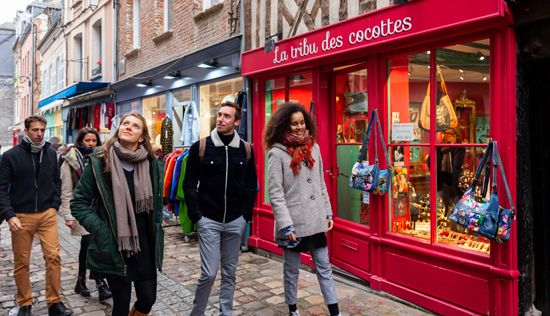 The coach will then take you to the Beaches of Normandy, which are the must-see World War II sites where the Allies landed in 1944. First, you will stop at the impressive American Cemetery in Saint Laurent/Colleville Sur Mer, which covers 70 hectares. Located above Omaha Beach, this site honors the American soldiers who lost their lives during the Battle of Normandy.

After driving for another half-hour, the bus will make a brief stop at Arromanches beach. You can still see the remnants of the pontoons for the artificial harbor that was built in England and brought to the site by the Allies so that they could land at high tide. 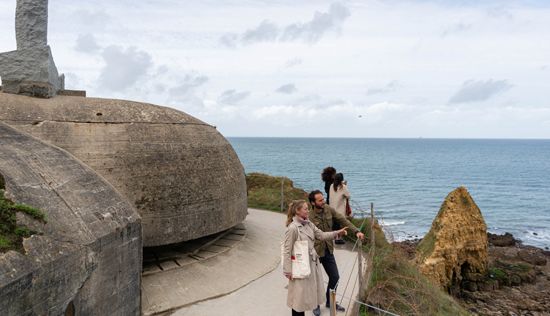 Then you will be taken to the Caen Novotel (or a similar hotel) where you will have dinner and spend the night.

DAY 2: Guided Tour to Saint-Malo and the Mont Saint-Michel

The second day is spent in the Brittany Region. After breakfast, the bus will drive for about two hours to the fortified city of Saint-Malo, which was once infamous for its privateers. First, you will go on a guided tour of this beautiful city and its considerable historic heritage, and then you will have time for lunch on your own. Notable sights include the city walls, Château, Saint-Malo Cathedral, and Fort National. 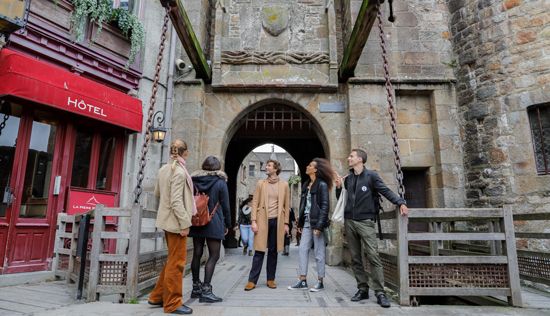 The bus will then leave this Breton town to take you to Mont Saint-Michel. No trip to France is complete without a visit to this town perched on a rocky peak. Let your guide lead you to the town entrance with its drawbridge and along the Grande Rue, which ends at the famous abbey on the top of the mountain. Enjoy a guided tour of this Gothic Benedictine abbey, which boasts a refectory, cloister, and garden offering a superb panoramic view of the sea. Afterward, you will have some free time during which you can stroll the bustling streets and take in the incredible view of the Mont Saint-Michel bay while you make your way down the city walls.

The bus will leave Mont Saint-Michel at 4:30 pm for Angers. About three hours later the bus will drop you off at the Angers Centre (or a similar hotel) where you will spend the night. You will find many restaurants near your hotel to have dinner.

DAY 3: Guided Tour to the Châteaux de Langeais, the Clos Lucé, and the Villandry Gardens

The morning of the third day starts with breakfast before setting off again to explore the Loire Valley.

About 100 kilometers from Angers lies Château de Langeais, the first stop on your tour of the Loire region. Your guided tour of Langeais, which is a mostly intact fortress, will take you on a journey through French history thanks to the castle's depiction of medieval life made with highly realistic wax figures.

After this first Loire Château tour, you will have lunch in Amboise, about 45 minutes from Langeais, at a restaurant of your choosing.

The early afternoon will be spent touring Château du Clos Lucé, which is just a ten-minute walk from Château d’Amboise. Built-in 1500 and now a UNESCO World Heritage site, this French castle was where Leonardo da Vinci spent his last years. On the guided tour you will learn about the private life of this Renaissance genius who spent the last three years of his life there as the guest of Francis I. The artist died at the château in 1519.

The next stop on the tour is Château de Villandry, about sixty kilometers from Amboise. Your guide will lead you through the Villandry Gardens. Magnificent paths lined by linden trees separate the various parts of the garden with its many terraces and themes. The lush vegetation and incredible colors are sure to delight you.

You will then settle in and have dinner at the Mercure Tours Nord (or a similar hotel).

The last day of the tour will be spent visiting three of the most beautiful Châteaux of the Loire Valley. After having breakfast in Tours, you will board the bus and set off for Château de Chenonceau (about 30 kilometers away). On your guided tour of Chenonceau, you will have the chance to admire this splendid château with its lavishly appointed rooms. A Renaissance masterpiece, the castle's unusual architecture makes it look like something out of a fairytale that has just emerged from the Cher river. Called the "Château des Dames", Chenonceau was built and renovated over many years by several famous French women such as Diane de Poitiers and Catherine de' Medici. 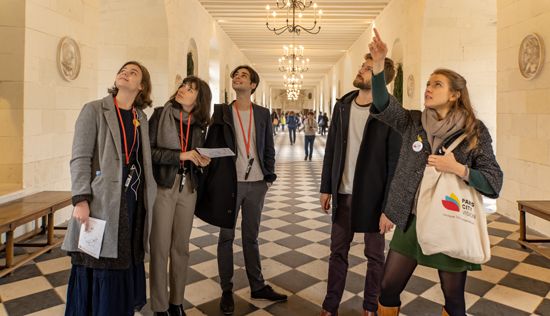 After a 45-minute ride, the bus will drop you off at Château de Cheverny. During the guided tour of this 17th-century aristocratic estate, which is still inhabited by descendants of the original family, you will learn how French people once lived by visiting the birthing room, the small boudoir, and the private dining room. Cheverny boasts exquisitely decorated royal apartments and a grand park with an impressive pack of hounds that participate in hunts to this day. Lunch will be served at the Saint Hubert Cour Cheverny (drinks not included).

* Exemple of menu, subject to modification 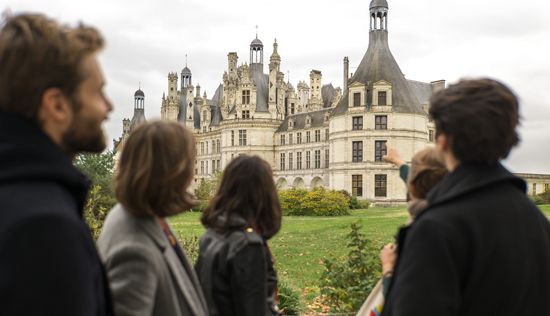 The trip culminates with a tour of the most majestic of the Châteaux of the Loire Valley, Château de Chambord, which is about 20 kilometers from Cheverny. During your guided tour of Chambord, you will be impressed by its fascinating architecture. Be sure to admire the imposing, intricate double-helix staircase and visit the former royal chambers and other rooms located on the castle's many levels. Take in the panoramic view of Chambord's park from the immense terrace, decorated with impressive chimneys.

The bus is scheduled to leave Chambord around 4:30 pm and return to our agency in the center of Paris around 7 pm.

Reviews from the community

They give their opinion

Overall, the organization of the tour (transportation, hotels) was fine. However, the group included more than 20 people, which exceeded the promised limit. Most annoying was the fact that the tour was conducted for each group in 2 languages. Thus we, English speaking tourists, had to waste a lot of time while the same explanations were given in Spanish. On top of it, our guide, Roberto, was extremely slow. He is a knowledgable and diligent person but cannot concentrate and goes on many extra details. In one of the castles, he spent about an our on the first floor, and we were left only 20 minutes to explore on our own the rest two floors. I am afraid he is unfit for the role of guide unless he radically changes his manner, sluggish, unemotional and unengaging. He needs to move and speak at least twice more quickly and energetically. Many people switched to another group, with a more lively guide. Your company has to seriously revise your policy of mixing languages in groups; people are very frustrated with wasting half of their their time during the tour, and this is the reason why I hardly will recommend your tours to friends.

Outstanding tour director and driver-they were 100% customer oriented. The hotels were great, clean and well appointed. I was totally satisfied with this tour.

The Tour guide Layla was exceptional her knowledge of languages and history is astounding. On the other hand the organizers on the first morning of our trip were useless, there was no system to getting us on the bus. I’m also not sure if that trip is suitable for young children, sitting on the bus all day and then getting restless, just saying. Anyway Layla needs a big gold star for her 4 days

COVID-19 information: Our tours and activities are not operated from Oct. 1 to Dec. 25. They can be booked online now for later dates. Click HERE to learn more about the sanitary measures implemented and the answers to frequently asked questions.